Why infrastructure debt is flying high

After years in the background, infrastructure debt has found itself in the spotlight thanks to a solid track record and evolving opportunities.

In Australia, the official cash rate is at historic lows, and further falls are likely. The Bank of England has set rates not much above 300-year lows. The Federal Reserve has cut rates twice in the second half of 2019. The Bank of Japan’s 10-year government bond yield has been negative most of the year.

In 2019, it’s tough for investors to find both yield and security.

Enter higher yielding infrastructure debt, an asset class that while not quite embryonic, is just an adolescent among investments, thus less understood.

It has been around for more than 20 years, albeit less understood than most other assets. It now has a track record – something that hindered it previously – and that record demonstrates good, stable returns. It is also not cyclical, which is crucial for any portfolio.

This year, Infrastructure Investor magazine began publishing a list of the top 10 infrastructure debt managers, reflecting the growth of the asset class. The rankings were based on the amount of direct infrastructure debt investments between January 2013 and August 2018. Of the top five, two were from the United States, two from Europe, and the fifth was AMP Capital from Australia.

While infrastructure debt comes in many forms, finding the perfect combination of secure returns, a visible investment pipeline and a sustainable investment strategy remains at the heart of the market’s challenge”

The best deals usually come in one of two places. The first is in existing regulated environments. AMP Capital has some excellent examples of investing in water utility companies and gas distribution pipelines. When there is only one such asset in a region and the infrastructure is regulated, we can be confident of the returns that business will generate.

The second is in deals where long-term contracts are in place. For example, a gas-fired power station might have a contract to sell power to a third party and know the price the power will be sold at and the volume that will be sold. The deal provides stable cash flow with low volatility.

Existing players in the infrastructure debt market have a comparative advantage, simply because of the high barriers to entry for other players. The asset class performs across market cycles and works best when there is political stability and mature legal, tax and accounting frameworks.

The investment team must negotiate strong covenants with high protection for investors and implement a rigorous credit process and due diligence on the borrower.

A secured infrastructure debt opportunity will typically have very detailed financial covenants, negative and positive undertakings by the borrower and a comprehensive security structure which includes fixed and floating charges over all the assets of the company we are lending to. 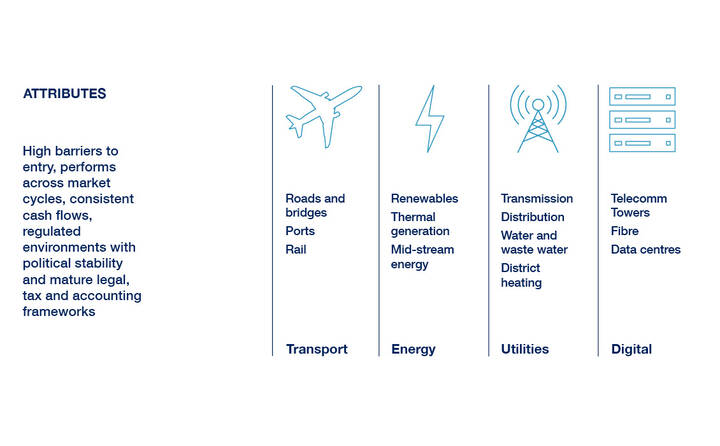 The characteristics of infrastructure debt, including long-term contracted cash flows, regulated environments and a low correlation with traditional asset classes, are very attractive to some investors.

We are at one of those points now because the amount of capital available for equity infrastructure has pushed prices up and there are very few managers out there such as AMP Capital that are willing (or able) to provide more than US$200 million in subordinated infrastructure debt to a single asset2.

1 Moody’s investors services Infrastructure and Project Finance Default Research 2018
2 Infrastructure Investor, 2019
3 Target returns are merely estimates and there are no guarantees that the returns will be achieved. Past performance is not a reliable indicator of future performance